Pulumi in Action is available now in early access. 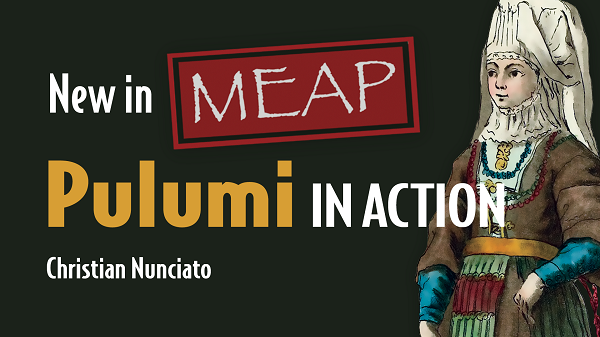 In Pulumi in Action, I’ll be writing about how to use Pulumi, the open-source project I work on full time, to build cloud applications and infrastructure with TypeScript and Amazon Web Services. I’m incredibly excited about this book — it’s my first — so I’m writing this post as a public expression of that excitement. (My wife often says I don’t often emote as much as I should, so I’m attaching an appropriately celebratory emoji as well, lest we be left with any lingering doubt. 🎉)

As of now, I’ve only written the first few chapters, but since the book is the first ever focused on Pulumi, Manning (the publisher) wanted to release it as a work-in-progress through MEAP, its early-access program. Thanks to them, you can both read and purchase — or if you like, read and not purchase — the book today, and as new chapters roll out, at around once a month, you’ll get access to them immediately, in all of the finest digital formats of the day. It’ll cover a lot of surface area — infrastructure as code, Pulumi itself, cloud-native software development and delivery patterns, and more — and is generally aimed at helping full-stack developers get a solid foothold into the cloud. You can read the first chapter for free on manning.com today, and browse all of the examples on GitHub. The print version is scheduled to ship sometime early next year, and should come in at around 300 pages.

So that’s it — that’s the post. I had written around two thousand words recounting the tale of how it was that I, a mere web developer, came to write a book about infrastructure-as-code, but my wife, upon reading those words, declared that most of them were unnecessary: what mattered, she pointed out, was what was in the book. So I’ll save the full backstory for the eventual preface, and for now, leave you with this: if you’re a full-stack developer, you should check out Pulumi, and when you’re ready to learn more, I’ll be here.

Update: I’m still writing a book — just not this book. After the better part of a year, I decided to part ways with Manning — long (and rather odd) story — and publish the book on my own. You’ll find the new (and still in-progress!) book on Leanpub. Check it out!