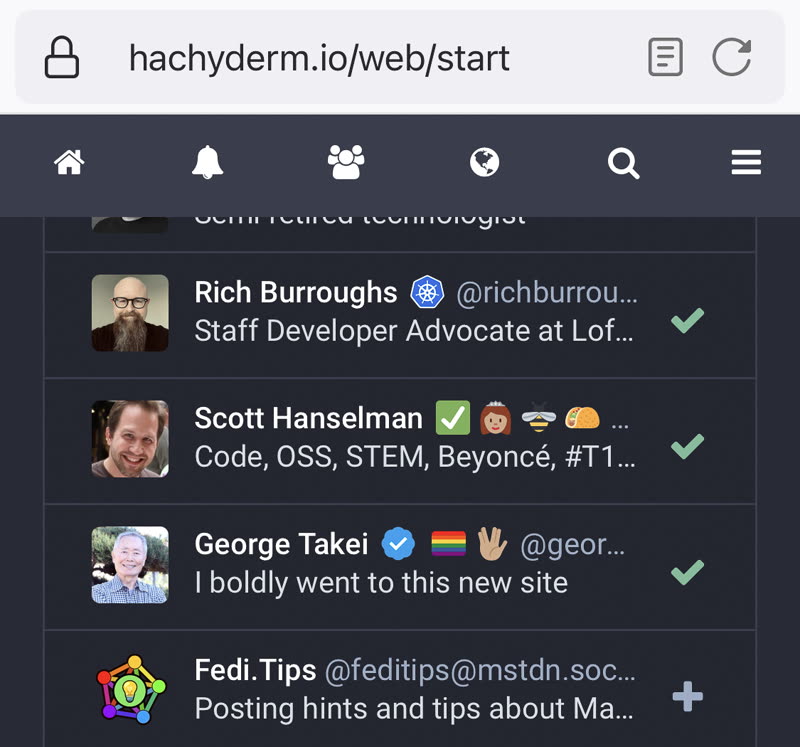 So long, Twitter! It was was fun while it lasted, kinda.

I’ve heard here and there that Mastodon is a “different” social experience from Twitter, and I haven’t fully taken the time to learn how — but the thought of continuing to hang around on Twitter, with a nutjob at the helm now and with Trump reinstated (not to mention all the noise, ads, and relentless self-promotion), just makes me feel sick inside. The last few weeks have made clear what an astonishingly despicable person Elon Musk really is, and I can’t bear the idea of lending any more of my time, attention, and creative energy to the business venture of yet another despicable person. I left Facebook in 2008 for the same reason, and aside from missing out on a few family photos from time to time, I haven’t regretted that decision since.

So far, Mastodon looks like an interesting experiment — and if the influx of new users over the weekend is any guide, the experiment might actually be working. Most of the people I follow on Twitter are already there, which doesn’t hurt. And I love the open and distributed nature of Mastodon, too. Kris @nova and her colleagues have done an amazing job setting up hachyderm and defining the guidelines for the community; I must say, it’s hard not to love the official Don’t be a Dick policy, which I’m hoping will shut up at least a few of the insufferable loudmouths I’ve had to endure over the past several months. So I’m excited, to say the least. Fingers crossed — we’ll see how this goes.

Oh! And here’s where you’ll find me: https://hachyderm.io/@cnunciato.